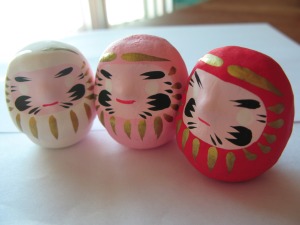 Daruma dolls represent the bounceability we all now need to flourish in these times. Nassim Taleb describes the early 21st Century as living in a world we don’t understand. As I have been discussing with you Uranus in Aries and Pluto in Capricorn is the astrological perfect storm for creating the necessary conditions for an environment punctuated by a real sense of transformation and shift. Todays solar eclipse in Taurus simply nudges us all one step forward in our own complex and changing inner and outer worlds. It will compel all of us to start to initiate some action towards transformation in our lives. But everything is moving so fast you say… Taleb suggests anti fragility is what is required to survive and thrive in an era such as ours. These years are being described as  Volatile, Uncertain, Complex and Ambiguous – We live in times of VUCA!

Anne Whitaker's astrology archive...do drop by and have a browse...

reclaiming and restoring the sacred feminine

The latest news on WordPress.com and the WordPress community.